Using a miter saw to cut your corner moldings or to make a perfect frame for that family picture is certainly a lot of fun and the only way to make get the job done in a professional matter.

However, it is not always fun to cut the various pieces of wood to lengths with the miter saw on the ground, always fighting to keep the piece of wood perfectly leveled and supported. In fact, that is why most manufacturers recommend that you buy a miter saw stand at the same time as you buy your miter saw.

The good news is that there is a wide range of products, that cost anywhere between 100 and 250 dollars. Some of these products are actually intended for a professional carpenter, construction worker, or any type of woodworker. However, there are some that may appeal to a professional as well as to an enthusiastic do it yourselfer.

So we have looked at some of the best products on the market and we came up with the following list of the top 10 best miter saw stands on the market.

You can read the review for each product, and find out which one fits your needs best, just by scrawling past the table below where you can get a glimpse of the best features of each product. 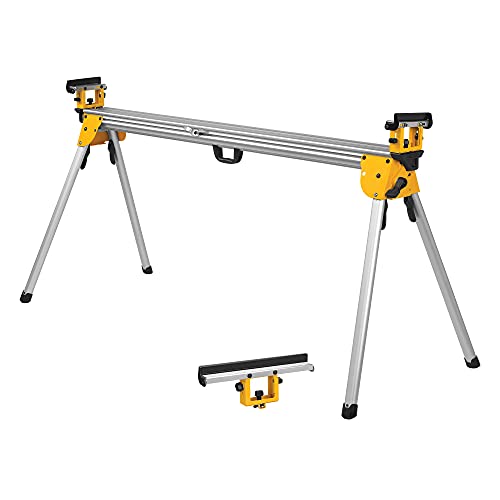 The DeWalt DWX723 heavy duty miter saw stand is one of the strongest, lightest and sturdiest product you will be able to find. It may be a little too expensive for the home enthusiasts, but it is actually perfect for use in a workshop of any type.

It is built out of aluminum so it weights a mere 35 pounds but it can withstand 500 pounds of weight. Its simple and straightforward design allows it to extend its central beam to support 16 feet of material.

And the best thing about it is that it comes with two types of mounts so you can use it with whatever miter saw you already own, even if it is not a DeWalt, although we strongly recommend using one simply because they are the best. 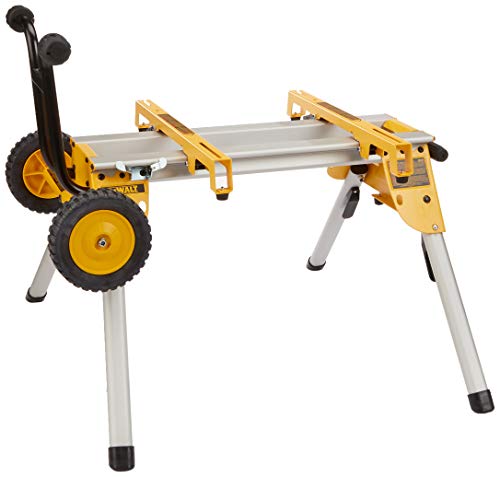 The fact is that, when it comes to miter saws and miter saw stands, DeWalt is pretty much the biggest name in the market so we are actually forced by the very quality of their products to feature several examples of their products.

Case in point: the DeWalt DW7440RS has been awarded a 4.8 star rating on Amazon from over 180 happy customers. In this, it is a perfect match for the DeWalt DWX723 we have featured earlier. The big difference between the two is that the DeWalt DW7440RS can be swiveled up and you can push it around on its wheels.

It is that type of on job mobility that recommends these products more to the professional woodworkers rather than the home enthusiasts. However, you should take into consideration the fact that it necessarily uses a more elaborate design so it can only support 200 pounds of material. 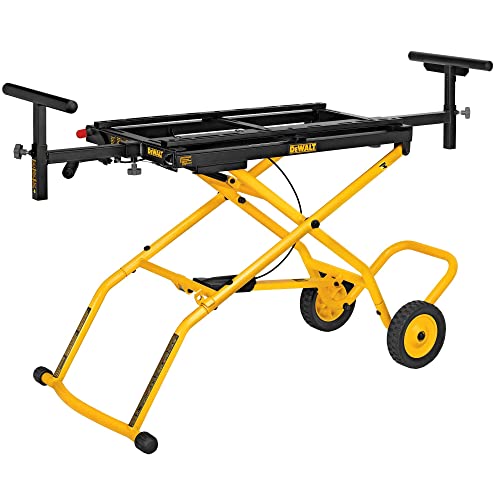 Before we move on to other brands of miter saw stands we wanted to also feature the DeWalt DWX726 because it is the perfect combination of the two products we have already talked about.

It uses a set of wide wheels to provide perfect, on-site mobility, but it is built out of steel tubes so it can support up to 300 pounds of weight. Still, not as much as the DeWalt DWX723, but you have to remember that the weight is supported, in part, by the wheels, and there is a limit to how much weight their axels can take. 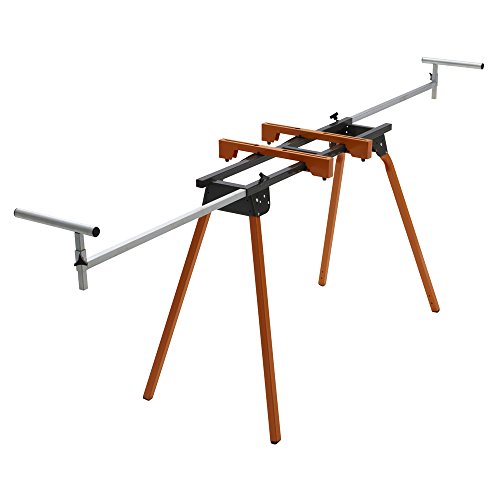 There are several reasons why we love the HTC PM-4000 but one of the most important ones is that it is a lot cheaper than the DeWalt products, which is quite important if you are just having fun in your garage, building stuff for your home.

And the fact is that they have not sacrificed quality for the price, as can guess from the fact that they have earned a 4.5 star rating on Amazon from almost 80 customers. It supports over 9 feet of material with a total weight of 500 pounds. So it is in direct competition with the DeWalt DWX723.

It even is lighter than the DWX723 with a total weight of 30 pounds. 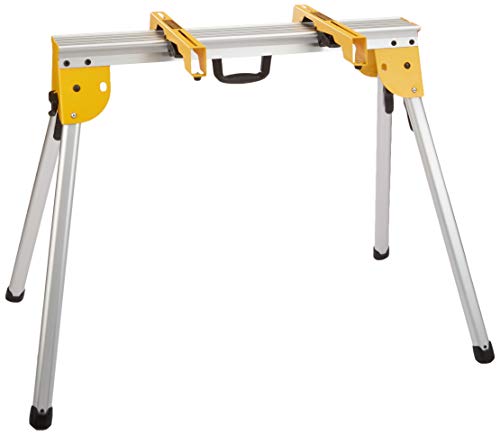 If you would like non-DeWalt prices in a DeWalt product, the DWX725B is the answer for you. It is not so much a miter saw stand as it is a work stand with a miter saw supports because it offers very little in terms of beam support.

However, it is the lightest miter saw stand you will ever find, at just over 15 pounds, and it can take 1000 pounds of direct pressure. It is made from aluminum so it is very sturdy and also has the guarantee that it will stand the test of time.

And it has earned a more than impressive 4.7 star rating on Amazon. 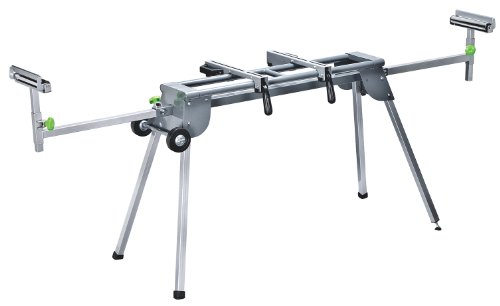 Although it did not impress us enough to make it in the top 5 we did like the Genesis GMSS400W enough to include it in our list of the top 10 best miter saw stands.

It can support 400 pounds of weight and it has a small set of wheels. They are of no use if you want to move the stand with the miter saw attached, but they of great help when storing the stand by itself. And it is one of the smallest miters saw stands once it is folded away. 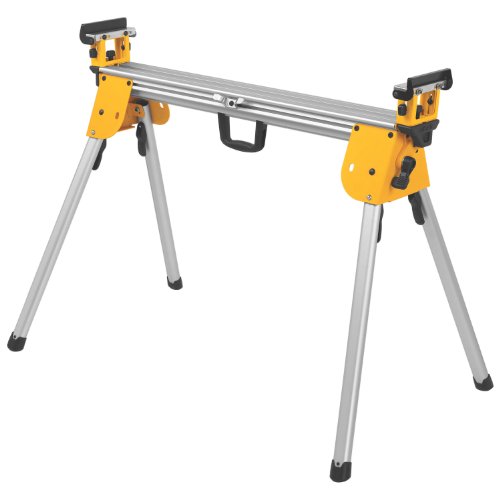 If you are a contractor that needs a standard miter saw stand to carry from one job location to another, the DeWalt DWX724 is the best choice for you.

It weighs just under 30 pounds and can be folded away to just 40 inches in length. Once it is opened, it can support 500 pounds of weight and support beams or logs that are 10 feet long. It is so loved by all those who try it out that it has received a 4.8-star rating on Amazon. 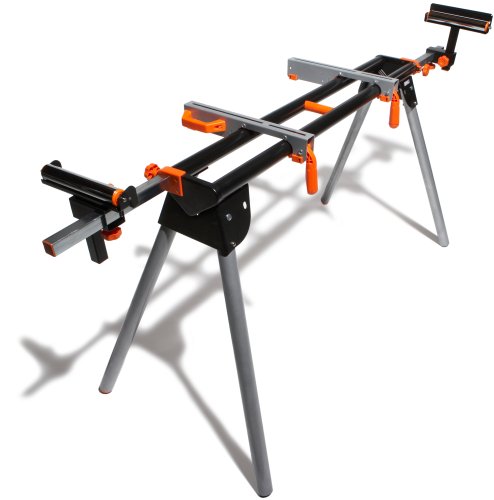 We decided to feature the Denali miter saw stand on our list of the best products in this category for 2 very simple reasons. For one, it has earned a 4.4 star rating on Amazon, from almost 120 customers and that speaks volumes to the quality of this product.

The second reason why we decided to include the Denali is that it is one of the coolest looking miters saw stands on the market today. The others may look more purposeful but this one will really impress your clients and colleagues because of how modern it looks. 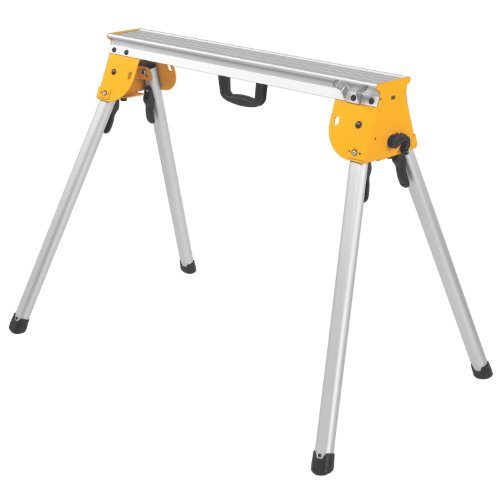 The DeWalt DWX725 is basically the DeWalt DWX725b without the included miter saw mounts. That means it is the best choice if you have miter saw that came with its own mounting system or if you still have the mounts from an older stand.

It is also important to note that this is one of the very few products we have seen with a perfect 5 star rating on Amazon. 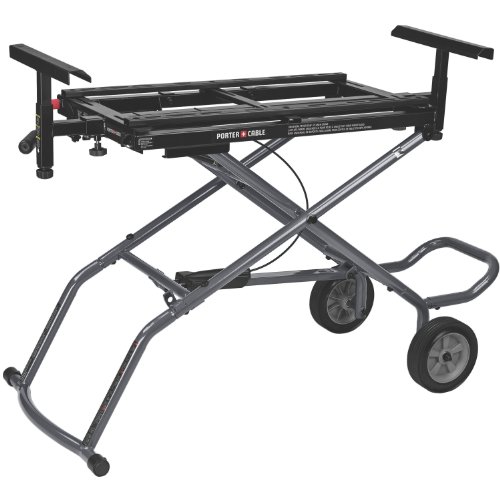 We are going to finish our list with the only non-DeWalt product with wheels that we found was good enough to feature on our top 10 best miter saw stands of the list.

The Porter-Cable PC136MS is a relatively expensive product but it is exceptionally well put together and extremely functional. We loved the fact that it can work with almost any miter saw on the market today and also the fact that it uses a pneumatic pump to adjust the height of the table to 1 of 3 predetermined positions.